Homosexuelle Initiative (HOSI) Wien, Austria’s oldest and most important lesbian and gay organisation, is condemning the move of the Christian-Democratic Party ÖVP to go into a coalition government with the right-wing and extremist Freedom Party FPÖ whose leaders and politicians have made a series of racist, xenophobic and anti-democratic statements in the past. The Freedom Party has also led an extremely populist and xenophobic electoral campaign last year. 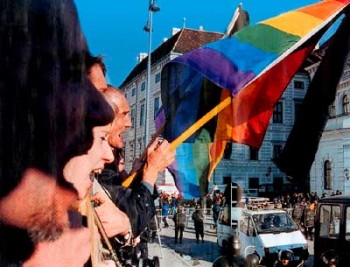 Vienna, Ballhausplatz, the seat of the Federal Chancellery and the Federal President’s Office: Gays protested against the swearing-in of the new coalition government on 4 February 2000

HOSI Wien has a long history of fighting against the anti-homosexual politics and attitudes both of the ÖVP and the FPÖ. These conservative and reactionary forces have been instrumental in denying to Austria’s lesbians and gay men full equality and human rights. Both parties are equally responsible for continuous legal and social discrimination.

HOSI Wien joins the protests in Austria against this coalition government. We had already signed the resolution of the Democratic Initiative organising the huge demonstration held in Vienna on 12 November 1999 against the attempts to form such a coalition. 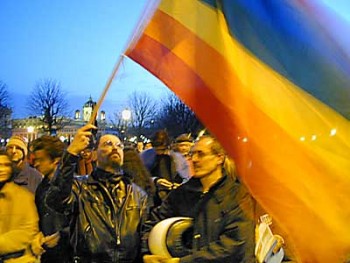 Lesbian and gay activists were visible in many demonstrations carrying rainbow flags, to which black mourning-crapes were tied.

The FPÖ is not a new phenomenon, the party has been around for decades, from 1983 to 1986 (until Haider became party leader) it was junior coalition partner of the Socialist Party (SPÖ). The FPÖ is represented in the provincial governments of most of the bundesländer. Haider has also been around for more than a decade, we all have got used to his way of making politics.

The new aspect now is that the Christian-democrats enabled Haider’s FPÖ to become part of the federal government. The blame for this new situation, therefore, must be on the ÖVP only. This party is our real enemy, the real evil that has caused the present disaster by its desperate attempt to win the chancellery. 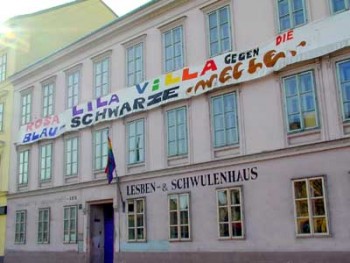 The Rosa Lila Villa, Vienna’s originally squatted lesbian and gay house, has been decorated with a huge banner: “The pink purple villa against blue-black waves”, this play with colours makes allusions to the party colours of the OeVP (black) and FPOe (blue) – the word “waves” being pained in brown colour refers to old and new nazis.

THE ANTI-HOMOSEXUAL RECORD OF ÖVP AND FPÖ

Haider himself has never made homophobic statements. But there are several politicians in his party, both at local, regional and national levels, who have made strong homophobic statements, as have made politicians of the ÖVP.In some instances, the FPÖ has been more supportive than the ÖVP. In November 1996, when the reform of three anti-homosexual provisions in the Austrian penal code was on the agenda of the Parliament, the FPÖ voted in favour of repealing the ban on gay and lesbian organisations (Article 221) while the ÖVP voted against. At that time, also the ban on positive information (Article 220) was lifted, however only by one vote because some of the FPÖ deputies missed the voting while. The party line of both the ÖVP and the FPÖ was to keep this provision in the law book. The attempt to abolish the discriminatory age of consent for male gay sex of 18 years (Article 209) failed because both ÖVP and FPÖ, who together had a majority also in the previous Parliament, voted against the repeal. In a provocative move, the FPÖ then proposed to lower the age of consent for gay men to 16. This bill failed because the social-democrats and the Green Party followed the advice of the gay and lesbian movement and voted against it. Since the heterosexual and lesbian age of consent is 14, it would only have replaced a discriminatory provision by another one. The movement feared that such a half-hearted step would be cemented for many decades.

Certainly, a coalition between ÖVP and FPÖ will have very negative repercussions on lesbians and gays in Austria because it will mean complete stagnation with regard to law reform. Article 209 will persist, there are still 20 convictions a year, and people still go to jail. We can also forget any plans for registered partnership in the years of such a coalition.

However, for gays and lesbians, the Christian-democrats are worse than the FPÖ. They have blocked law reform also in the coalition with the social-democrats because, as mentioned before, also in the previous Parliament the ÖVP held a majority together with the FPÖ. The ÖVP is also more dogmatic and fanatic in its anti-homosexuality while the FPÖ might be more susceptible to arguments.

Concrete deterioration will also occur in terms of subsidies to gay and lesbian projects. The movement of course will survive because it luckily has never been dependent on funding from the federal government. HOSI Wien has received funding from social-democratic ministries in the past to carry out, for instance, projects with ILGA-Europe. Such funding will certainly stop now.

This website uses cookies to improve your experience while you navigate through the website. Out of these, the cookies that are categorized as necessary are stored on your browser as they are essential for the working of basic functionalities of the website. We also use third-party cookies that help us analyze and understand how you use this website. These cookies will be stored in your browser only with your consent. You also have the option to opt-out of these cookies. But opting out of some of these cookies may affect your browsing experience.
SAVE & ACCEPT